Brief History of Hindu Marriage - 5.1 - Taming of Fire as chronicled in Vedas

This work is licensed under a Creative Commons Attribution-Noncommercial-No Derivative Works 2.5 India License.

Om, We praise Agni who is a Purohita (one who is appointed/sent ahead to make things favorable) of Yagna (any adhibhautika, adhidaivika and/or adhyatmika effort), a devata (radiant and luminous entity), Ritvija (one who initiates various Yagnas as per need of space and time), Hotar (One who invokes various Devatas in course of Yagna) and Ratna-daataa (one who adores the yagna-performers with gems, that is, fruits of performing yagna)

Hindus have been performing all their 16 sanskaras (or rites of passage) in presence of fire. Fire is the first word of the earliest composition of human-being as seen in the verse quoted above which is itself a tribute to effect that the discovery of fire has had on quality of human life and evolution. Rigveda is earliest composition of mankind. As described in previous parts of this article-series, Vaidik literature itself is a vast memory-pool of those times much earlier to the stage when man started composing something as ethereal as Vedas. Vedas give a vivid picture of those times when speech was being discovered (bird songs of Saama and Rik veda). Similarly, Vedas give a vivid picture of times when fire was first tamed by mankind.

As it is with the earlier articles, the main reference of this essay too is monumental treatise of Itihasacharya V K Rajwade, named "Bhaartiya Vivaaha Sansthecha itihaas". In previous part, we saw how the concept of Mitra and Atithi are closely associated with evolution of human pair-bond and eventually Hindu-marriage institution.

The story of evolution of human pair-bonding which essentially the story of Hindu-marriage institution, is intrinsically linked with discovery of fire. This final part of this series, is in a way a rehash of all the information presented in earlier parts coupled with the fact that discovery of fire enabled many cultural changes in human society, fundamental of which is movement of man from marital satyayuga as described by Bhishma in earlier parts to institutionalized marriage with stable pair-bonds (either monogamous or polygamous).

If and when we get enough data to track the path of human evolution, discovery of fire seems to be the most important land-mark after human ability to walk on two legs. Fire is devastating hence fire is referred to as Krishna-varma (one who blackens every thing) in Rigveda, when the composers talk about earlier days. One thing Vaidik composers have done is meticulously preserved these prehistoric words, descriptions, rituals and human-preferences in form of rites. Man observed that when fire is around, predators seem to stay away. But there was no means to "make" fire. Given the climate of India, the wild-fire is prevalent in summer months. Rest of the 12 months, this protection was not available.

However, they discovered that forest-fire can be preserved in caves or similar natural shelters by constantly feeding them with small dosage of inflammable substances like dried twigs, leaves, branches, charcoal etc. Thus fire which was "seasonal" started becoming available throughout the year. Thus was described as गुहाहितं गुहाया निहितं (one who is preserved in caves) in vedas.

But there was a problem. The fire meticulously preserved in depths of caves could not be transported in all places where life is sustainable (like on banks of rivers). The group of people who overcame this problem and who were deputed of preserving and transporting fire to desired location are referred to as "Angirasa" in vaidik literature. Angirasa is a sage (or group/clan of sages) who called themselves children of fire and who brought fire in all yagnas. This is slightly similar to the earlier greek story of prometheus, although Angirasas are lauded by gods (devatas) and men alike for discovering means of fire-transportation.

Thus portable fire, the necessity of staying close to the caves to stay safe from predators became redundant. Fire could  be preserved in huts and be carried as one moved. In event of attack on an Vedik village by predatory animals or rival human tribes (referred to as Dasyu in Vedik literature), they attack could be repelled using fire as weapon. Similarly, it was a very handy tool while attacking rival clans AND hunting.

To stay ready to respond to a raid by predators of rival tribes, the ancestors of people who composed Vedas started digging small ditches in their huts and kept blocks of wood burning inside constantly. Thus a "Yagna-Kunda" or "Sthandila" was invented. They never ventured anywhere without carrying fire along. With this invention in their quiver, they set out from their homeland, that is Saraswati-Sindhu-upper Ganga basin and migrated in rest of Indian subcontinent. A cursory look at Indian countryside would still show many Sadhus still carrying Dhuni as they make temporary camps during their constant "Parivrajaka" (wanderers) phase. Many of them still carry fire in form of dhuni as they wander.

It is interesting that nowhere in early Vedic literature is there any mention of flint-stone. Their ancestors had recently discovered the method of transporting fire in form of Dhuni and making fire my meticulous means of friction-heating the inflammable substances like dry wood and saw. A particular verse of Rigveda interestingly points at invention of "Torch" by mankind. These were the ancestors of these "Angirasas" who's usage of torch as weapon and as a handy tool to "see" in darkness is spoken of in these verses of Rigveda.


Our ancestors had given rise to tools like Ulka while searching for the cows hidden by the evil Pani people. Our ancestors had worshiped and consumed Agni. With the help of Agni (in their hands in form of Ulka), they invoked Usha (the deity of brightness at dawn) in the dark caverns of the caves where Panis had hidden the cows. WIth the help of Agni, they opened the closed door (and other obstacles, mostly of wood) and hailed him as the path lay open. As they ventured inside, the darkness increased so they asked for help from Agni again who graciously gave them "Jyoti" thus enabling them to see in dark (as they moved swiftly) and rescue back the cows abducted by Panis.

The interesting terms to look in this otherwise very famous Vedik story of Panis, are Jyoti, Ashmavajraa and Ulkaa. Angirasas are also famous for अग्निः अर्चयन्तः ज्योतिः अविदन (Worshiped Agni and gained knowledge of preparing "Jyoti"). Here Jyoti means torch or Mashaal (as it is popularly known in Hindi). A handy and portable fire weapon/tool was extremely handy in their raid against barbarian tribe of Panis who had stolen their cows. All this description has happened much before this verse of Rigveda was composed, hence the composers speak of their age-old ancestors who did this "long time ago". So this was much before agriculture was invented and man was mostly hunter-gatherer with recently mastered art of animal-domestication. The term व्रज (known as ब्रज  or Braj in Prakrita) is famous term for cow-stable. Ashmavraj (cow-stable made of large stones) for protecting and containing cattle along with portable fire, huts, cattle and yagna-kunda within each hut to preserve fire are the typical signatures of these ancestors that Rigveda composers talk about.

During the days when these ancestors of Rigvedik seers were leading this life, it seems that the region around the Yagna-Kunda was leveled and consecrated and plastered using cow-dung. Cow-dung is even today very widely used to plaster the floor and walls of huts in villages. A typical  Indian village courtyard leveled and plastered with cow-dung looks something like this - 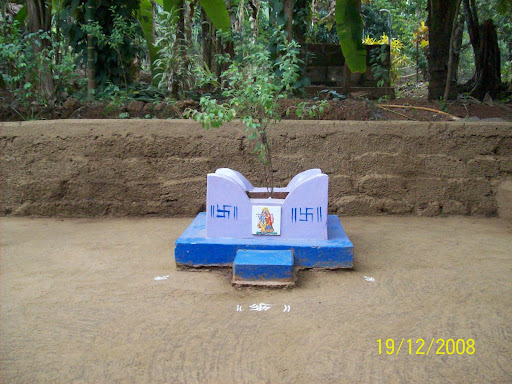 A hut with leveled and cow-dung plastered floor around the Yagna-Kunda was the place for family or the clan to hang out after day's tiring work. There used to be public Yagna-Kundas in the courtyards in front of huts similarly leveled and at times sheltered using thatches which is still a very common scene in rural India since the days of these distant ancestors of Rigvedic composers. These Rigvedic ancestors used to sit around these fire-places, drink Somaras, indulge in philosophical discussions (which over the period of time evolved into Vedas, Upanishads and various earlier philosophical schools like Saamkhya-yoga), star-gazing (which later led to vedic astronomy and astrology or Jyotisha), dances (these tribal dances of these distant ancestors over the period of time evolved into famous classical dances of India), dramas, mimicries and enactments (which later evolved into elaborate science of Theatrics or Naatyashaastra), cook and eat together and compose poems in various meters or Chhandas together. And last but not the least, the important function of "procreation" was conducted around this very yagna-fire. This is where the fire became indispensable part of Hindu-Marriage institution. We will talk about this aspect in next and final part of this series. The story of fire-taming from Vedas itself is so fascinating and worth-telling that without understanding the significance of this tool, it is difficult to understand how Agni is still such an integral part of all our rites of passage from birth to death. Vivaaha is simply one of those passage. Agni is witness to all of this.

According to internal references of Vedas as well as now recently discovered geological references, this Saraswati-Sindhu basin of western India was the "homeland" of Veda-composing people and their ancestors who called themselves "Aarya". When these ancestors of Vedik people ventured and settled in rest of North India, they had already began composing and preserving Vedas and called this entire land of North-Indian plains from Assam to Afghanistan as Sapta-Sindhu (land of seven rivers) and Aaryavarta (Land of the Aryans).

But all this happened much later. The distant ancestors of Rigveda composing seers (hundreds of thousands of years before human beings started composing Vedas) who discovered the techniques to tame fire and preserve it and store it passed on these memories from generations to generations. It is these memories that we see chronicled in various parts of Vedas.  These are very ancient memories we are talking about. Hence they are extremely vague and smudged all over. As the memories start becoming recent, they start becoming more and more clearer as we see in the memory of Angirasas rescuing cows from Panis is quite vivid and perhaps not as old as discovery of fire itself.

All this truly justifies the word "Sanaatana Dharma" which Hindus use to describe their way of life and civilization. The way of life stretching so back to pre-history, to the origins of where it all began is denoted by this term "Sanaatana Dharma". And while it shows the origins deep in pre-history and shows continuity of that dharma until today, it also chronicles the way in which people changed, adapted and reformed the Sanaatana Dharma to keep this continuity and this link with origins intact while staying contemporary and changing with space and times.

This very heritage and continuity makes it worth preserving.

Fellow travellers in my Journey...

Annals of Past Deliberations...